being a hero in the name of love 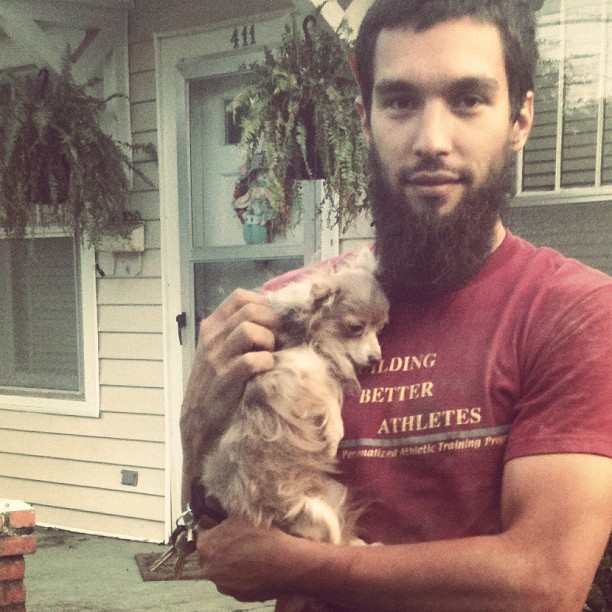 On Saturday morning my sister ( and next door neighbor) lost her 3 pound chihuahua 'Foxy'. It's like she just disappeared from her normal everyday morning pottytime. My sister had already left for work. Her hubby had let both of their tiny chihuahuas out to do their usual thing but could only find Gracie when said and done.  From my front door I could see him pacing the road barely dressed and I just knew something wasn't right.  I asked him what was wrong and he said "I can't find Foxy". My heart sunk. Not necessarily for my love of the dog but for love in general. These dogs are my sisters children and she loves them immensely.  She is in her mid 40s and doesn't have nor does she want any children.  Foxy and Gracie are her babies.  You can imagine how broken she was.  We searched and searched in shock and disbelief. What could have happened? I did not think she would have run off, away from her home. Foxy is so skittish and timid. She does not let anyone, other then my sister, get close to her. Plus she is so tiny, I couldn't imagine her wandering off.

Well, it was Monday evening and I received a call from my sister who was about 10 hours away by now in route to picking up a new baby chihuahua to help her heart feel less empty.  Someone saw Foxy about 3 blocks away.  I could not believe it.  Honestly, we were pretty sure she was gone for good being so tiny and fragile, she has actually knocked herself out just jumping off the couch before.  I anxiously took off on foot heading to hopefully bring Foxy home safe back to her loving family. When I got to where she was seen last she had already scurried under the nearest house.  I looked franticly hoping to set my eyes on her and see for myself that it was in fact Foxy. After looking around the perimeter of the house I finally spotted her. It was her. She was within an arms reach but I hesitated as I just knew if I reached for her she would scurry farther and I was afraid to loose sight of her again. I phoned my sister to tell her I see her and she is okay. She pleaded in tears "please don't take your eyes off of my baby".  I called to her but she did not respond, I put my sister on speaker phone and she called her but no response. My mom went to the store and brought back her favorite treat, still no response.  After nearly 30 minutes I tried to reach out and catch her with a net but as I feared she only scurried deeper under the house.  I called my hubby knowing he was the only one who would even consider crawling under a house barely 1 foot off the ground at it highest point.  Luckily he was only blocks away on his way home from work. When he arrived he joined me on the ground to look under the house and he was expectedly hesitant when considering the task at hand.  As I peered through the darkness barely able to see Foxy's tiny silhouette I felt dispirited, ' what was I going to do?' 'I could not just leave her there.' 'What if I lost sight of her again?' My stepdad and a dear friend then left to find a trap of some sort, an idea I was not necessarily excited by.  I made my way to the other side of the house closer to where she was but with my cheek pressed to the concrete I could hardly see anything through the barely 5 inch space.  By this point my heroic hubby was already squeezing his way under the house to catch her. He was telling me where she was between us but I could not see anything.  Then I heard him say the most wonderful thing "I got her!" What a joyful moment.  He handed her to me through a tiny space, barely 4 inches by 4 inches. I cried in relief. Funny as it may be it was a short, powerfully emotional tear jerking release similar to that moment I birth my children.  The power of love. Though she is just a dog my sister has a powerful love for her, I have a powerful love for my sister and my hubby has a powerful love for me. Love is Love! It can make magic happen. It can move mountains. It can make you fit yourself in unrealistic spaces for tiny timid four legged family members.

Thank you honey! You did something so special for me and my family. In the name of love. You are our hero!

note :: for a dog that doesn't like anyone look how sweetly she rests her head on her heros chest. she is thankful for him too.